The Battle of Lumbridge world event offers players several rewards, most of which are bought with Renown from the Saradominist quartermaster or Zamorakian quartermaster. Others are earned while participating in parts of the event, or constructed with Sacred metal fragments. Over the course of the 10-week event, tier 2 rewards were unlocked at the beginning of week 4, and tier 3 rewards will be unlocked at the beginning of week 7. Week 10 of the event will be the last chance to get these rewards.

Upgrading your faction token through collecting renown will also unlock new conversations with people in the camp, Padomenes for Saradomin's faction and Moia for Zamorak's.

By joining a faction, the player will gain a small overhead icon, matching his or her god's symbol. This can be disabled or enabled by checking "Display allegiance" under the "Adventures" interface.

When a player signs up with a faction, they will receive a bronze token from their recruiter. It is automatically upgraded as you earn renown, you do not need to spend any renown to upgrade it. The token provides 10 daily teleports to your faction's camp from anywhere in the world, including from up to level 40 Wilderness.

When examined, it is revealed that the token in fact gives a small bonus to divine tears, as well as boosting damage dealt against the opposing faction and reducing damage received from the same. The collection boosting effect begins at the silver level, while the damage reduction begins at the gold level. The token also affects the experience received while skilling in the battle crater. The formula for the experience gained is $ XP = (10+SkillLevel)*TokenModifier $.

It is equipped in the pocket slot, and can be used to perform an emote while equipped.

The Zamorakian token's emote
Click an image to enlarge

Warpriest armour is a set of hybrid armour which levels up with the player's Defence level, with a maximum of 75. The set has 3 possible stats: for defence level 25-49, for defence level 50-74, and for defence level 75 and above. The stats are updated upon equipping the armour. If a player gains level 75 Defence while wearing an armour piece, they have to un-equip it and re-equip it for the stats to update. Each armour piece gives a 1% chance to reduce damage to 10%, but that effect activates only if 3 or more pieces are equipped.

Lost pieces can be repurchased for a reduced price. However, after having changed factions, the store no longer offers the reduced price.

It is possible to own both sets of armour, however it is not possible to own two pieces of the same armour part at the same time (in other words, you cannot buy bank place-holders). On 29 July, it was announced that the armour can be used for God Wars Dungeon as the armour now counts as that god's armour[2], however this did not work correctly until a second patch on 13 August. On 13 August, it was also announced that the level 75 version of the armour would be members only after the Battle of Lumbridge event had finished.

After the end of the Battle of Lumbridge, the armour will only have its full potential on member worlds. In free worlds, it will be capped at level 50[3].

Players can combine items dropped by NPCs on the battlefield with 1,000 Sacred metal fragments to create cosmetic overrides. Although the overrides can be used on free worlds and sacred metal fragments can be obtained by free players, the components only drop on member's worlds. If one chooses to switch sides with one of the weapon pieces obtained on that side, it will remain with them upon switching. 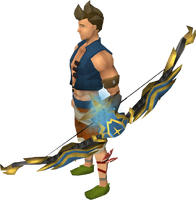 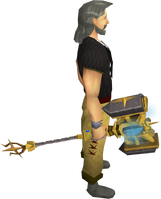 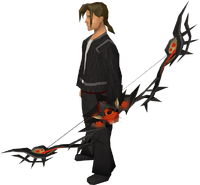 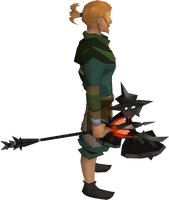 Players can purchase unique emotes from their quartermaster. They will only show up in the "All" emote list after purchase, but are always shown in the "Holiday" and "Achievements" emote lists. Emotes of both factions may be owned at the same time.

Titles can be purchased from either Saradominist quartermaster or Zamorakian quartermaster. The titles from each faction have a separate entry in the customisation interface and are displayed in different colours (saradominist titles in blue and zamorakian in red).

Temporary boosts in the form of drinks are available for purchase. They only have effect on the battlefield.

Experience lamps can also be purchased with renown. Lamps are available in each size, from small to huge.

In a hidden update on 13 August 2013, all experience lamps (of each size) were merged into a single item, costing the same as the original Tier 1 lamps.

The original cost, before the hidden update, of the experience lamps was:

Retrieved from "https://runescape.fandom.com/wiki/Battle_of_Lumbridge/Rewards?oldid=8798773"
Community content is available under CC-BY-SA unless otherwise noted.