Not to be confused with Battle of East Lumbridge.
[view] • [talk]

The Battle of Lumbridge is a ten-week world event that takes place alongside the beginning of the Sixth Age and the dawn of RuneScape 3. It started on 22 July 2013. The battle is waged between the god of order, Saradomin, and the god of chaos, Zamorak, and occurs in Lumbridge between the area which was the Lumbridge Swamp and west of the Lumbridge Castle. The battle features weekly choices made by the players which will define its outcome and course of action. It was stated by Jagex as having an "ultimate outcome [which] will set the course for RuneScape’s future."[1]. The event is set to end on 29 September 2013, at the end of tenth week.

Some time after Guthix was assassinated and the Edicts of Guthix were abolished, a large portal appeared west of Lumbridge Castle. People flocked to this portal, all speculating as to what the portal was, and what would come through it, although most agreed that its appearance had something to do with a god. As time went by, the portal grew bigger, and more people flocked to it.

Weeks after the portal first appeared, it finally opened, and Zamorak stepped through it. Seeing cracks of green energy in the ground, power left after Guthix's death, Zamorak started attacking the ground in an attempt to get it, causing onlookers to flee. At this point Zamorak was shot in the back by Saradomin, and at once the two began fighting. Firing beams of energy at each other, they caused a huge explosion, damaging much of the nearby Lumbridge, and forming a large crater, with more of Guthix's power seeping out of the ground.

They both created a camp at the edge of the battlefield, and Zamorak summoned his general Moia and some Black Knights, while Saradomin summoned his general Padomenes and summoned some White Knights, which charged at each other, beginning the battle. The gods tasked their followers with collecting fragments of Guthix's power, in the form of divine tears, which were found all over the crater, to increase their power and overwhelm the opposing god.

Players' role in the battle 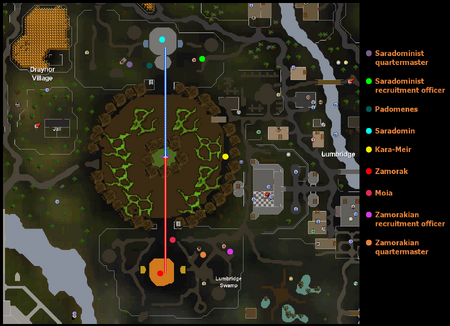 Aligning with a faction

With Zamorak and Saradomin both struggling to gain control of the power left by Guthix, they require the aid of adventurers to help them gain the upper hand. Players may choose which god they wish to follow, and head to either the Saradominist or the Zamorakian camp after confirming with the Recruitment Officer of wanting to help. The Recruitment Officer will give the player a token representing the side the player wishes to help. If the player wishes to change sides, they may speak to Kara-Meir located near the Lumbridge lodestone at any time[2].

Players can help by collecting divine tears to help fuel their god's power and help them gain the upper hand. Tears can be collected in two ways, either through combat or skilling.

After joining one of the gods, players will be given a token depending on what god they chose (i.e Zamorakian token or Saradominist token). The token improves through depositing divine tears to the chosen god (and receiving renown for doing so), starting off at bronze then silver, gold, runite and dragon. Tokens give a small boost to the amount of divine tears you collect. Gold, Runite and Dragon tokens even reduce damage taken from the other gods forces by a small amount. Tokens also change the amount of XP earned while skilling or fighting on the battlefield. The formula for the experience gained for resource gathering skills is $ XP = (10 + \mathrm{SkillLevel}) \cdot \mathrm{TokenModifier} $, and for combat, the experience gained is $ XP = (3 + \mathrm{SkillLevelOfCombatStyle}) \cdot \mathrm{TokenModifier} $, and an additional of 10 XP and another 2.5 constitution XP, where the modifier for a bronze token is 1.2, for a silver token is 1.4, gold is 1.6, runite 1.8, and dragon 2.2.

Tears can also be earned from skilling, both on and off the battlefield. On the battlefield are mining, woodcutting, and fishing spots. There is no skill requirement to do this, and players collecting tears on the battlefield will not be attacked by enemy soldiers, save for aggressive Saradominist and Zamorakian sharpshooters. These sources will become depleted for a short amount of time, even when no players are collecting tears from them. Tears can also be earned by skilling outside the battlefield, in a similar way to how anagogic orts are collected. Tears are awarded from skilling surprisingly frequently, and a player can quickly collect a substantial amount of tears from skilling activities such as farming, fishing, herblore, hunting, mining, runecrafting, and woodcutting. The players skill levels (and utilised tools and equipment) used to obtain these tears also have no effect on the rate at which they are collected (both on or off the battlefield).

Getting tears on the battlefield, either from combat or skilling, starts from a multiplier of 4 (for free players) or 5 (for members)[3]. As more tears are collected, the multiplier decreases down to zero, so as to prevent a player in exceeding the daily maximum divine tears collection limit. The tear multiplier is restored every day at midnight (UTC). Previously, there was a bug where the multiplier was not restored but this has since been fixed[3].

The multiplier displayed in the battlefield HUD is rounded to the nearest integer; i.e. your multiplier has a constantly decreasing fractional part that is not displayed. As the player cannot have non-integer amounts of an item, this is handled differently. At most times, the fractional part is ignored; however, at amounts that are (invisibly) closer to the next integer, tear gathering can show the fractional part. For example, at a newly changed 4x multiplier, you may notice tears are harvested in a pattern such as 4, 4, 4, 5. The additional tears bonus from tokens cannot entirely account for such a regular interval. More definitively, the opposite can occur at a 5x multiplier with a pattern such as 5, 5, 5, 4.

Free players can harvest up to 1,320 divine tears a day, while members can harvest 3,000[1]. While mining a divine shard, a message might be displayed saying players have reached a 'weekly limit' of divine tears gathered, however this would not stop them from actually collecting divine tears by other methods. It is also still possible to mine another divine shard, but it may require several tries. The following table shows the tear multiplier when players gather a certain amount of tears in a day.

After the voting in week 8, the rate of divine tears gained in the battlefield was increased by 5%.

Once divine tears are collected, they have to be deposited at the collection point located in each of the faction's camp. If the player switches between factions, the contribution to the previous faction is reset.

The Duke's Dilemma is a weekly player-choice event during the Battle of Lumbridge. Lumbridge was very badly damaged by the battle, and Duke Horacio is currently working on rebuilding the city. Each week he asks players to vote on how to allocate the town's emergency resources toward dealing with various situations pertaining to this goal. The Duke has a total of 160,000 coins to use for rebuilding. The situation will change periodically through the world event. Players will be limited later on in the event by the amount of money they have spent. Voting can be done by either speaking to Duke Horacio, using the right-click option "Manage-Crisis", or by accessing the lectern in his room.

Regardless of which option the player chooses, they will be rewarded with an amount of bonus experience for voting, which players can add to a skill of their choosing (e.g. "The Duke grants you an XP bonus. This will be used up as you earn XP in this skill."). Members will earn double experience as you earn experience in the skill, until the XP bonus from Duke Horacio decreases to zero. The remaining bonus experience can be checked by hovering over the chosen skill in the skills menu. Several of these bonuses are bugged though, fishing for example.

The first two weeks were available to all players: free players and members. However, starting at week 3, the voting changed to require membership. The Duke's Dilemma ended in week 8 when the remaining treasury was exhausted to buy food for the citizens of Lumbridge.

Every week, votes (accumulated through contributing divine tears) can be spent to decide the outcome of chosen buffs and reinforcements for the following week. Votes not spent in the previous week will carry over to the following week.

Buffs provide a boost to the faction (such as more damage to the enemy, or less damage from the enemy), and the chosen buff will be displayed in battle HUD.

Reinforcements to the battlefield will be in the form of more powerful enemies providing additional benefits to the faction.

Players who wish to switch factions can do so by talking to Kara-Meir. Players will lose their god token (Zamorakian token or Saradominist token), accumulated renown, and votes. However, players will retain in their inventory all battle-related items (i.e. divine tears, sacred metal fragments, warpriest armour, etc.), and will still be able to use unlocked emotes and titles.

From time to time, random events will occur on the battlefield. Messages appear as a drop down from the battlefield score HUD, and as game text in the chatbox when they occur. It is possible for two different events to happen at the same time, even two different node events such as the sacred metal nodes and yellow nodes. 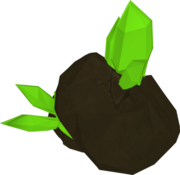 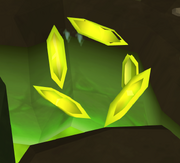 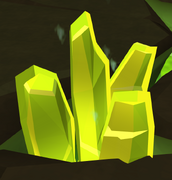 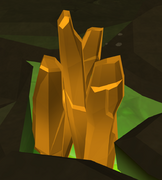 A formation of divine tears temporarily affected to give fragments

A pool of divine tears temporarily affected to give fragments

Occasionally, clones of Jagex mods will appear on the battlefield, fighting for the god that mod supports. While they have different appearances and use different combat styles, they all provide a healing aura to nearby followers, and boost the speed at which divine tears are gathered.

Players can attack the clones, and the clones' level scale to the level of players that attack them. The clones can be healed for 10 divine tears by right-clicking them and selecting the heal option. The clones are not aggressive towards players as they target other JMods first, then NPCs. They do not charge to the other side of the field.

The clones always drop a sizable amount of divine tears, and have the potential to drop several joke items (such as off-white partyhats and really rotten potatoes) which will vanish if a player attempts to take them.

Progress of the battle

Outcome of the battle 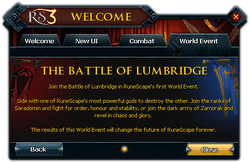 Lobby message upon logging in

The Battle of Lumbridge as shown on the noticeboard
BOL-Teaser2.jpeg
Another teaser image
Click an image to enlarge

Zamorak, having just arrived from the portal

Lumbridge, about to be destroyed by a powerful blast

Saradomin summons his troops to fight against Zamorak

Zamorak commands his troops to attack

The soldiers of both factions, locked in combat for their god
Click an image to enlarge

The Saradominist quartermaster sells wares to those who show devotion to Saradomin.

A Saradominist recruitment officer rallies supporters of Saradomin to the battlefield.

A small chest on the edge of the camp allows access to the bank.
Click an image to enlarge

Moia stands at Zamorak's side as troops charge into battle

The Zamorakian quartermaster sells equipment, emotes, titles and items useful on the battlefield.

Retrieved from "https://runescape.fandom.com/wiki/Battle_of_Lumbridge?oldid=8971172"
Community content is available under CC-BY-SA unless otherwise noted.