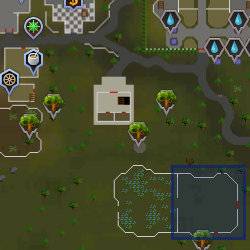 Bees are non-interactive insects found buzzing around the beehives west of Catherby. Their hives are maintained by the beekeeper. Although they are harmless while outside their hive, if a player attempts to take wax from their hive without first using insect repellent on it, they will attack and deal a small amount of damage.

They originally appeared in the beekeeper random event, and chased players who failed it, forcing them to run into a pool of water for safety. This version was called "Bees!" and had a different examine text. This version also appeared at beehives near Gunther during NovtumberFest.

Retrieved from "https://runescape.fandom.com/wiki/Bees?oldid=24565129"
Community content is available under CC-BY-SA unless otherwise noted.