A rather distinguished pack yak. 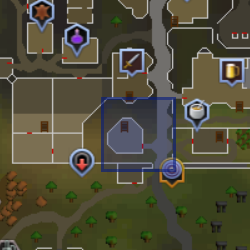 Benedict Encumberyak is a sight-seeing yak who can be found in Varrock, in a building north west of the Varrock lodestone. Players can speak to him to obtain a Scrapbook and begin the Benedict's World Tour miniquest, during which players can see the benefits of NXT. Following the mini-event will reward players with some small and large XP lamps.

To complete the tour, players have to follow a scrapbook of clues which will lead them to stand in specific locations and collect objects. Players will have to be using the NXT client to take part in the tour. A loot beam will shine over each item.

Retrieved from "https://runescape.fandom.com/wiki/Benedict?oldid=24565532"
Community content is available under CC-BY-SA unless otherwise noted.