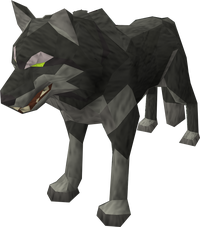 Big Wolves are high-level wolves that lead packs of other wolves. The most well-known Big Wolf is found on top of White Wolf Mountain near the gnome glider, and can prove deadly to new players attempting to cross the mountain. Other Big Wolves can be found in the Chaos Tunnels. Despite their intimidating combat level, they have relatively low defence, so someone with decent armour and a fast weapon such as a scimitar at or above a combat level of 50 can easily defeat them.

Their drops are not very good, although it seems to drop charms quite frequently. However they do drop wolf bones, which are a mediocre source of money to low-level players, although other wolves provide a better source of them.