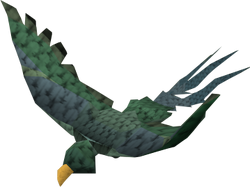 Birds are avian enemies found on Ape Atoll, Crash Island and inside the Nature Altar. They attack with melee and can be assigned as Slayer assignments by Turael and Spria. Although they are airborne, they use melee and are weakest to Earth spells.

The ones in the nature altar are blocked off, and as such can only be attacked by ranged and magic. Once dead they fall to the ground, but drop nothing.

When assigned as a slayer task, you can also kill other low-level birds such as Chickens and Seagulls.

Retrieved from "https://runescape.fandom.com/wiki/Bird?oldid=19994979"
Community content is available under CC-BY-SA unless otherwise noted.