The bird snare is an item available from Hunter suppliers; Aleck in Yanille, Artimeus in Nardah, and Ayleth Beaststalker in Taverley. These snares require no bait. They are set in Hunter areas to catch various birds. Snaring birds always provides bones, raw bird meat, and various coloured feathers to be used when fishing or fletching.

Bird snares have three stages - set, sprung, or successful. Snares will fall over if they are left unattended in any of these stages, and will be subject to the normal drop mechanics. If a snare is successful but left unattended, it will eventually fall over and all loot will be lost.

The player can always set a snare, no other items are required. Once a bird attempts a landing, the snare will either catch the bird and become a successful snare, or fail to catch and become a sprung snare. To reset a sprung snare the player must have one free inventory space, as the snare is first dismembered into your inventory and then reset in the same location. To retrieve loot from a successful snare the player must have four inventory spaces (three if you already have a space stacking the bird feathers).

Snares give a small amount of Hunter XP for setting and resetting, but most Hunter XP comes from retrieving the loot once a bird has been caught. It is undesirable to leave a successful snare sitting for too long, as the snare may fall over and all XP and loot will be lost.

Birds follow a similar path-finding system as players (e.g. will not fly thru trees, will not fly thru walls, etc). Set snares so that birds can approach from as many of the four cardinal directions (NSEW) as possible. Birds will not fly on the square where the player is standing, so it is advisable the player move after setting the snare, as by default the player will be standing in a square next to the snare blocking incoming birds. Birds will hover in place if they are blocked, and will eventually either continue on their original path (the snare may have fallen over by this time). Note that inspectable plants, such as jungle plants, are also not a valid bird flight path, and snares should also avoid being placed beside them if possible. (try to use the Walk Here option on a square. If player cannot walk on the square, it's likely a bird cannot fly there). Placing snares on a square diagonally (e.g. North-east, or South-west) touching a non-passable square does not affect birds landing and will not result in hovering birds.

Most birds appear in small groups of 2-6. Most birds have a pre-set loop they will fly, with small variations from that path being somewhat common. Players should watch the flock and set their snare in a spot where multiple birds fly nearby - the snare will attract birds in a 3 to 4 square radius. Learning the bird spawn points is also valuable as you can place traps nearby and rapidly catch birds, who then shortly thereafter respawn in the same location (as opposed to setting a snare farther along the birds loop, which requires the player to wait for the bird to fly over after they have spawned). In some bird flocks the spawn points are near each other and the player can set multiple snares in one location and rapidly catch many birds as they spawn.

A snare ready to go 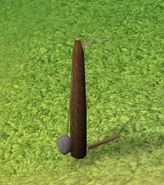 A snare needing to be reset

Retrieved from "https://runescape.fandom.com/wiki/Bird_snare?oldid=24535228"
Community content is available under CC-BY-SA unless otherwise noted.