Start a Wiki
This article is about the NPC encountered during the pre-release of the Battle of Lumbridge. For other Black Knights, see Black Knight (disambiguation). 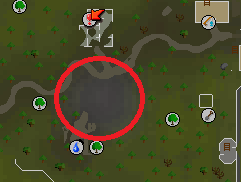 The Black Knight is an agent of the Kinshra, a Zamorakian organisation attempting to take over Asgarnia. He had travelled to Lumbridge in anticipation of Zamorak's arrival through the mysterious portal there. He was ultimately right about the portal's creator, for Zamorak did indeed emerge from it, starting the Battle of Lumbridge.

The knight speaks
Retrieved from "https://runescape.fandom.com/wiki/Black_Knight_(The_Battle_of_Lumbridge)?oldid=24564920"
Community content is available under CC-BY-SA unless otherwise noted.