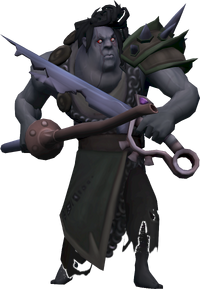 The Black Knight Titan is a giant that is encountered during the Holy Grail quest. He will prevent players from passing the bridge in the Fisher Realm until Sir Percival becomes the new king, and as such is immobile. A halberd can also be used from two squares away to melee him without taking damage. A simple tactic to defeat him is to use poison to lower its life points before killing it in close combat. If the last blow dealt to him is not done with Excalibur, he regenerates all his life points and players must kill him again.

The Black Knight Titan is fightable as a class E boss monster in the Dominion Tower minigame if the player has completed Holy Grail. In the tower, the titan can be slain without using or needing Excalibur.

A graphically reworked Black Knight Titan also acts as the final boss of Gower Quest, where he must be fought off at the life altar multiple times. He killed the cabbagemancer tending to the altar in order to lure the player there, so he could take their disk of returning and replace his outdated counterpart in Gielinor. After he is defeated, Andrew will give him a disk, and he will replace the outdated titan. His outdated counterpart can be spoken to in Behind the Scenes to toggle between his original and updated appearance.

Retrieved from "https://runescape.fandom.com/wiki/Black_Knight_Titan?oldid=23100856"
Community content is available under CC-BY-SA unless otherwise noted.