RuneScape Wiki
Register
Don't have an account?
Sign In
Advertisement
in: Dungeons, While Guthix Sleeps, Locations featured on the log-in screen, Quest locations

The Black Knights' Catacombs is a dungeon that plays a role in While Guthix Sleeps. Players gain access to this dungeon during and after the quest.

To enter, players must enter the Black Knights' Fortress and climb down the ladder in the southwestern corner of the ground floor. Either a bronze helm and an iron chainbody, full Dagon'hai robes, full elite black armour, full black armour, Black Knight captain's armour, or the Dulcin armour are needed to enter the fortress. Alternatively, the Skull of Remembrance teleports players into the fortress's top floor after Death of Chivalry. Once down the ladder, players must cast any charge orb spell on the strange tile (during While Guthix Sleeps) or go down the trapdoor (after the quest).

The dungeon contains Elite Black Knights, warriors, rangers, and mages. They all use Prayer when battling. Players may range or mage the knights and warriors as there are some safespots. To stop them from being aggressive, the player must wear elite black armour or Dagon'hai robes.

Players must rescue Silif from this dungeon during While Guthix Sleeps. Also, the only way to access Lucien's camp is through this dungeon.

Levels 1 and 5 are safe in that there are no opponents present. Levels 2, 3, and 4 contain foes who will be aggressive to players who do not wear elite black armour or Dagon'hai robes.

1 - Ladder to ground floor of the Black Knights' Fortress.

2 - Trapdoor to level 2. During the While Guthix Sleeps quest, this trapdoor is initially hidden and must be revealed using magic.

3 - Broken bridge. Players may jump across the gap in the bridge. (The other bridge crossing the chasm is not broken but only leads to a dead-end area.)

The barricade on this level can be jumped across on its western side or simply walked around on its northeast side.

5 - Three elite black guards. They use protection Prayers, so players should use at least two types of combat (melee, ranged, magic) to kill them. Each has his prayer run out after 20 attacks by the player. In the quest, each of the three must be killed once before the player can advance further into the dungeon.

6 - Prison cell. During the quest, the cell initially contains Silif, until the player frees him.

8, 9 - Doors. During and after the quest, each of these doors "seems totally and utterly locked". It is conjectured that a future quest or update will allow players to pass these doors.

10 - Western cave, where during the quest the player can find a number of items needed in the quest.

11 - During the quest, Dark Squall/Surok is usually in this area, until he is captured.

12 - Ladder to level 5. After Surok is captured, players can climb the ladder while impersonating Surok (wearing Dagon'hai robes).

13 - The stone circle. When standing in the circle, a player can use the strange teleorb, together with one law rune and one death rune, to teleport to Lucien's camp. 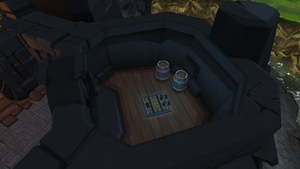 Trapdoor down into the catacombs 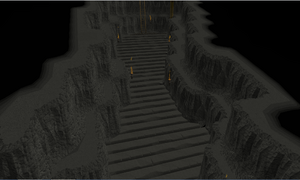 The entrance to the catacombs. 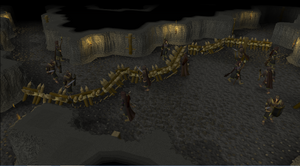 The camp of the local dark warriors. 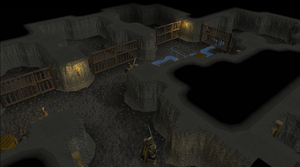 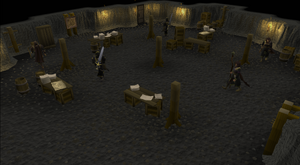 The office of Dark Squall.