View source
watch 02:56
Raise a Floppa - The Loop
Do you like this video?
Play Sound
RSCOS
This article is about the quest. For other uses, see Black Knights' Fortress (disambiguation).
[view] • [talk]

Black Knights' Fortress was the first quest in the Temple Knight series.

The Black Knights are up to no good. You are hired by the White Knights to spy on them and uncover their evil scheme.

To start, speak to Sir Amik Varze on the 2nd3rd floor[UK] of the White Knights' Castle, in central Falador. He can be found in the west tower of the castle.

He tells you that the Black knights have started demanding a lot of money from Falador, and threaten to invade the city if it's not complied with. Although he doesn't take the threat seriously, he feels uneasy at the black knights' mention of a powerful, secret weapon and will ask you to check on them. He hands you a dossier for more information.

The fortress is located north of Ice Mountain, just south of the Wilderness wall. The fortress is not very far from Edgeville, so players may simply home teleport to Edgeville and run south-west to reach it. To gain access to the fortress, you will need a bronze helm and an iron chainbody. Additionally, it can be time-saving if you obtain a cabbage from anywhere, except Draynor Manor. A cabbage can be picked from the Edgeville Monastery on the way to the fortress.

Before entering the fortress, equip the helm and the chainbody. Enter the sturdy door on the south side of the fortress. As you are disguised amongst all the guards, you will be permitted to enter into the fortress, hassle-free.

Since it is not necessary to keep the guard disguise once in the fortress, better armour may be used for greater protection.

Listen-at the grill, and you will eavesdrop in on a conversation below you. Apparently, the Black Knights have commissioned a witch to brew them an invincibility potion to fight against the White Knights. Part-way through the conversation, the witch orders her goblin servant, Greldo, to bring a cabbage growing in Draynor Manor, and that any other cabbage would only wreck the potion.

Make sure you have a cabbage with you, and return to the entrance of the castle. Once you're there, go into the banquet hall to the east, filled with all the knights. When you try to enter the room, you will be notified that the knights are in an important meeting and that anyone who tries to enter the room will be killed. Enter the room anyway.

In the hall, climb up the ladder in the north-west corner of the room. Walk south-east, through the hallway, to reach a wall. Push it open and you will see a hole in the floor, which is coincidentally, placed just above the witch's cauldron.

Right-click on your cabbage and use it on the hole. A cutscene shows the witch waiting for Greldo to return while your cabbage drops down into the cauldron, ruining the potion and the Black Knights' plans.

Now that you have successfully foiled the Black Knight's plans, return to Sir Amik Varze and inform him of the good news. He will be pleased and reward you. 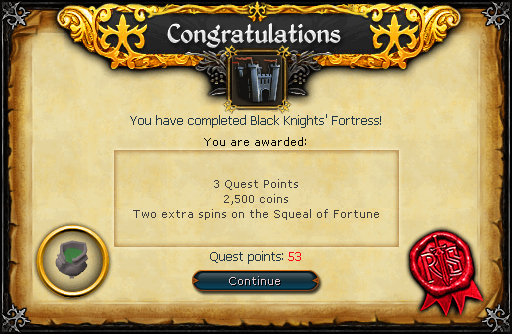 Completion of Black Knights' Fortress was required for the following:

The music that plays when the cabbage falls into the potion.
Български Deutsch Suomi
Community content is available under CC-BY-SA unless otherwise noted.
Advertisement