RSCOS
This article is about the regular black demon. For other uses, see Black demon (disambiguation).
123
45
? (edit) 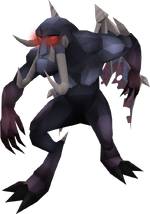 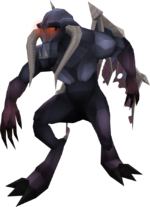 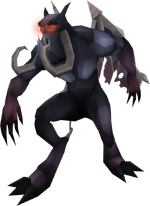 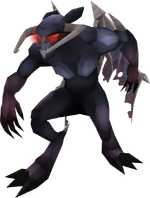 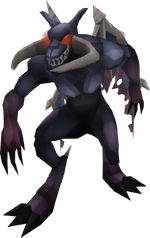 Black demons are large demons that inhabit various locations across RuneScape. They use Magic attacks that can hit up to 672. They are stronger than their greater demon cousins and are often assigned by Sumona, Duradel/Lapalok, Kuradal and Morvran as Slayer tasks. Black demons drop infernal ashes as a 100% drop and are considered a good source for crimson charms with more than a 40% drop rate for these charms. They are far weaker than their combat level suggests - players who fight equally with lesser demons might have only little trouble with defeating black demons, with the use of prayers and abilities. Because of their high combat level and relative ease to defeat, black demons are often killed for their starved ancient effigy drops and slayer experience.

Black demons originate on Infernus, where they were called Alyaroth, as did the other demons seen in Gielinor. They are part of the Avernic race, which were tribal and primitive, and slaves to whoever was ruling Infernus at the time. At the time of Palkeera's memory of the realm, they were enslaved by the cannibalistic Chthonians, who were unable to consume the Avernics for some reason. Among the Avernic demons, the Tsutsaroth were the dominant tribe, ruling over the Alyaroth and Byzroth in a brutal manner.

The nearest banks to Taverley Dungeon are the west Falador bank or Taverley bank, both of which are quite close to the dungeon. The black demons, however, are fairly deep within Taverley Dungeon. This makes for a fairly long journey unless a player has 70 Agility to use the shortcut to the blue dragons, or 80 Agility to use the shortcut to the poison spiders. Alternatively, a player can use 5 dragon trinkets to teleport to the blue dragons. A summer pie may be used to boost agility by 5. If the player does not have the Agility level required to use the shortcuts, a dusty key will be required to access the area. This spot can yield very good Slayer experience on tasks if using a cannon. The best option for banking is using the Taverley Lodestone, and running south to the bank. The Taverley bank is within sight of the dungeon entrance which can be right-clicked to enter from just outside the bank. Other options for fairly quick banking are to teleport to the Castle Wars bank chest and return using the balloon transport system or to Home Teleport to Falador and use the west Falador agility shortcut. This area is usually not recommended due to the long distances involved for players without at least 65 Agility and also uses up an inventory space for the key needed.

Brimhaven Dungeon is also good for fighting black demons - getting in and out is no threat but can be time consuming if you are not using the Dungeoneering cape. A cannon can be used to defeat these demons, but it can also fire at the nearby wild dogs and iron dragons. Karamja lodestone is right outside the dungeon, allowing for quick access. There is another black demon in the same room as the bronze dragons.

875 coins are required for every entry - this fee is waived once the Hard Karamja tasks are completed.

This area is located within the Wilderness and is frequented by player killers.
Edgeville Dungeon is considered a convenient place to slay in relative peace as there are three spawns, enough to sustain one player. This can be used for high levels as players can easily bank in an empty world by filling their inventory up with items, then going to the ladder to the obelisk and use the Home teleport to the lodestone for relatively fast banking for the infernal ashes and other potentially decent drops.

This area requires travel through the Wilderness.
The black demons in the Chaos Tunnels are located in the north-western section, in a room connected to the dust devils to the south, and earth warriors and bronze dragons to the west. The closest entrance to the black demons is the level 6 entrance into the gargoyle chamber. Players should be advised of the dangers involved in navigating the Chaos Tunnels before fighting here, including traversing through several areas with aggressive monsters, and outside, the risk of PKers. A player with 70 Dungeoneering can use the Resource dungeon located in the black demon chamber, as it's less crowded. The Dungeoneering cape offers unlimited teleports to the entrance of the resource dungeon, without needing to go through the Wilderness or other chambers.

Players using Guthan's set can heal with them though care should be taken to not to mis-click on the portal to the bronze dragons. Players can also easily bank up infernal ashes by using the Home Teleport to Edgeville. This area isn't crowded usually. Players who die here by accident will respawn at Edgeville and it should take around 2–5 minutes to get back to your grave, depending on the chances of misfiring portals.

Players need 70 Dungeoneering to access the Chaos Tunnels resource dungeon, which works well for melee. There are eight black demons in here. Prayer is highly advised, as there are multiple demons in this area which can potentially deal more damage than you. Using Soul Split to heal the damage taken is highly recommended but not required.

For players with 99 Dungeoneering or higher, this location is a great option for killing Black demons, as you can use the perk of the Dungeoneering cape to access the dungeon at anytime or alternatively players can use a hoardstalker ring.

This area is located within the Wilderness and is frequented by player killers.
A group of seven black demons can be found in the ruins south of the Demonic Ruins. If the player is killing black demons for a Slayer assignment at this location then they can gain 20% additional Slayer experience by equipping a demonic skull. They can gain another 20% extra experience per kill if they accept a special slayer contract from Erskine while assigned black demons as a Slayer task. These experience bonuses stack, meaning the player may gain 40% extra Slayer experience. Completing a special slayer contract rewards the player with a choice of coins or combat experience.

Wear the best Ranged gear available to you. The higher the level of Ranged armour you wear; the better defence will be towards magical monsters such as demons.

Black demons have a high defence against melee attacks, as they are magic-based monsters.

Concept art for the graphical update
Click an image to enlarge