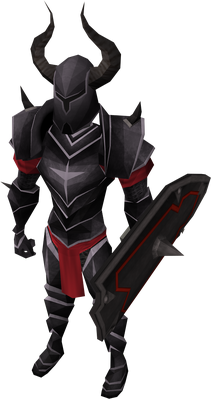 Black equipment consists of weapons and armour stronger than steel equipment, yet weaker than mithril equipment. As with all things black, they have a black colour. Black, along with its counterpart White, is a coloured form of Steel as a result from specialised forging techniques which also slightly increase its defensive capability.[1]

Black weapons give medium attack bonuses. Players require an Attack level of 25 to wield them. Black in general is much more expensive than steel as many players like the dark black colour as well as the fact that some black items cannot be bought from stores. Because of this, some high-level players may still be seen wielding black weapons and armour. All black items cannot be smithed. Black armour is comparable to white armour, unlocked after the Wanted! quest. However, white armour is for members only and has a slight Prayer bonus. Players wishing to fight the Tormented wraith after the Summer's End quest must equip black armour and weapons.

Black armour is currently the fifth-highest quality armour on the standard spectrum of metal armours (bronze to dragon). Black armour requires 25 Defence to wear. Regular full black costs around 9,000 coins. Black, along with dragon and white, are the only three metals that cannot be smithed into weapons or armour (except for the Dragon platebody and Dragon square shield).

In the March 2012 Behind the scenes it was announced that this armour, along with various others, would be given a graphical overhaul.

Players can obtain special items of black armour, called Elite black armour, during and after the While Guthix Sleeps quest. Elite black armour requires 40 Defence to wear and is roughly the equivalent of Adamant armour. Players can wear this armour without having started the quest (and can purchase it on the Grand Exchange, although it is somewhat expensive). This armour is members only.

Players will obtain Captain Dulcin's special armour during the Death of Chivalry quest. It has no stat boosts or bonuses, existing only as cosmetic armour. After the quest, it can be obtained as a cosmetic override by replaying the fight against Dawn.

Trimmed and heraldic armour has the same bonuses as standard black armour, however it is more expensive. These can be obtained by members from Treasure Trails or for free players by buying in Grand Exchange.

Black items that do not exist

Retrieved from "https://runescape.fandom.com/wiki/Black_equipment?oldid=21097855"
Community content is available under CC-BY-SA unless otherwise noted.