Start a Wiki
OS
This article is about the plateskirt version. For the platelegs version, see Black gold-trimmed armour set (lg). 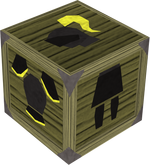 A black gold-trimmed armour set (sk) is a variant of the Black armour set (sk). None of the pieces can be made by a player. The stat bonuses of this item are identical to an ordinary Black armour set. It requires 25 defence to wear just like regular black armour. Only Members can find parts of it (from level 1 Treasure Trails), but non-members can purchase it and wear it. The item is mostly worn to show off wealth. Before the Grand Exchange this set was between 300,000 and 500,000 coins, though it has risen to over 2 million coins. This set looks very much like elite black armour but with less gold which is peculiar for gold trimmed armour. This is also a common merchanting item for F2P players and non-excessively wealthy members.

Retrieved from "https://runescape.fandom.com/wiki/Black_gold-trimmed_armour_set_(sk)?oldid=24536946"
Community content is available under CC-BY-SA unless otherwise noted.