Northern Lumbridge, next to the furnace 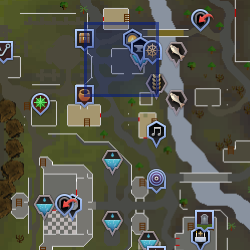 Blacksmith working the bellows is an NPC who can be found next to the Lumbridge furnace east of the Combat Academy, where he helps to keep the public furnace running. Unlike most non-player characters, the blacksmith cannot be spoken or interacted with, although he can be examined. He is classed as an object not an NPC and as a result he does not appear as a yellow dot on the minimap.

The blacksmith replaced the Smelting Tutor on 17 September 2009 as part of Jagex's rework of Lumbridge and much of the free-to-play Starting Area[1]. As the Smelting Tutor himself was not originally present in Lumbridge, his removal and replacement puts the furnace more similar to its original state.

The blacksmith himself does not help to explain smithing to new players, and as a result he serves only to add realism to the game.

Retrieved from "https://runescape.fandom.com/wiki/Blacksmith_working_the_bellows?oldid=24563903"
Community content is available under CC-BY-SA unless otherwise noted.