An expert on the brewing of ales and cider. 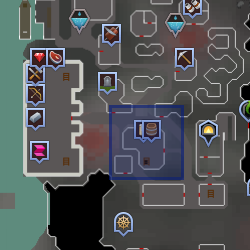 Blandebir is one of the many dwarves that inhabit the bustling dwarven metropolis of Keldagrim. A noted brewer, Blandebir is often the first stop for players seeking to learn the art of brewing.

Blandebir can be found upstairs in The Laughing Miner Pub on the eastern side of Keldagrim, near the Consortium building. There, he assists players in their brewing by offering advice about how to brew. More importantly, though, he is one of only two NPCs that sell ale yeast, a necessary ingredient in the brewing process. On a nearby table is a pot, which can be used as a convenient portable container for ale yeast. He sells ale yeast for 25 coins.

Retrieved from "https://runescape.fandom.com/wiki/Blandebir?oldid=24562978"
Community content is available under CC-BY-SA unless otherwise noted.