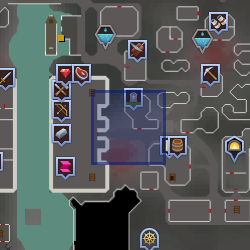 Blasidar the sculptor is a dwarven sculptor from Keldagrim who features heavily in The Giant Dwarf quest. He also has a son called Dardar. After King of the Dwarves, players may purchase the Dwarven Gravestone from him.

During The Giant Dwarf, the statue of King Alvis (the last king of Keldagrim and founder of the Mining Consortium) is destroyed. Blasidar is then selected to rebuild the statue with the help of the player. There are many unexpected difficulties to this, however.

Blasidar can be found on the east side of the dwarven capital of Keldagrim, in the building directly east of the northern end of the marketplace. The building contains two NPCs (which appear as yellow dots on the minimap) - Blasidar and Riki the sculptor's model.

If you engage in conversation with Blasidar, he will proceed to ask you to help him rebuild the statue. Help includes gathering ore, buying clothing, and even searching for a dwarven model.

Concept art of Blasidar. Judging by the date, it was used for Dardar.

Blasidar featured in the Lumbridge Rebuildathon head banner.
Click an image to enlarge
Retrieved from "https://runescape.fandom.com/wiki/Blasidar_the_sculptor?oldid=15718078"
Community content is available under CC-BY-SA unless otherwise noted.