The blisterwood tree is a tree hidden in the Arboretum in Darkmeyer that the vampyres fear. Being immortal, it has resisted centuries of attempts to kill it. They were once found all over Morytania, but after it was thought extinct, a single blisterwood tree started growing through a crack in the floor of a building in Darkmeyer. It had resisted all attempts to destroy it, so Drakan built a vault around it as an alternative. The Blisterwood Tree features in the quest Branches of Darkmeyer, where the player makes a weapon from its wood to fight the vampyres in Darkmeyer, Vanstrom Klause in particular.

It is believed that Queen Efaritay created the tree as a means of destroying the vampyres, making it unkillable and the greatest threat towards the vampyres and vyrewatch.

Upon first chopping this tree, you obtain 3 blisterwood logs. Later, you can fletch each log into one of the following:

All of them have tier 70 accuracy and damage rating, and can be used to damage vampires.

After the initial cut, players can chop the tree to obtain more logs. Eventually the tree will have to repair itself (similar to a normal tree falling over). The tree respawns about as fast as a regular or oak tree and provides multiple logs per "session" just like oak trees and better. 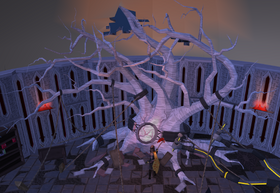 A player chopping the tree 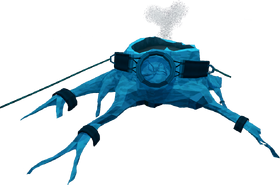 Retrieved from "https://runescape.fandom.com/wiki/Blisterwood_Tree?oldid=20923496"
Community content is available under CC-BY-SA unless otherwise noted.