OS
This article is about the normal Bloodveld. For other Bloodveld, see Bloodveld (disambiguation).
686192 (GWD)92 (Meiyerditch)
? (edit) 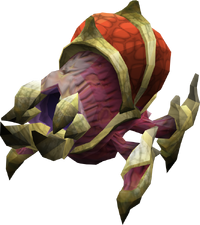 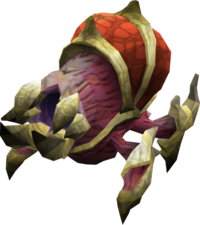 Bloodveld are Slayer monsters requiring level 50 Slayer to kill. Aside from Slayer tasks, bloodveld are sometimes killed for their favourable green charm drop rate, otherwise they are rarely killed off-task.

Their appearance changed upon release of the Smoking Kills quest on 5 June 2008 and again in August 2014.

The God Wars Dungeon is usually not a recommended place to kill bloodveld. There are 3 close together near the Zamorak entrance area and 4 close together in the Zamorak area. You also need God-related items to protect yourself from them and other monsters. There are always spiritual warriors and spiritual mages killing Zamorakians outside of the entrance. The nearest bank is in Burthorpe. Although slower to kill, bloodveld give significantly more slayer xp per kill at the God Wars Dungeon. The Troll Stronghold quest must be partially completed to access this area.

Bloodvelds in the God Wars Dungeon will not be aggressive if a player is wearing a Zamorakian item or the Shard of Zaros.

The Slayer Tower is a popular choice for those who have not completed Legacy of Seergaze. There are several bloodveld spawns on the 1st2nd floor[UK] of the tower, in the south-west corner. The nearest bank is Canifis. Bloodveld here cannot be cannoned.

The Meiyerditch Dungeon is an alternative place to kill bloodveld. Mutated bloodveld, a stronger variant, can be found here along with regular bloodveld. Because of this, the regular bloodveld are usually ignored. Always watch out for skeletal hands or zombie hands that drop from the ceiling or appear from the ground. Teleport to the Meiyerditch Dungeon using Drakan's medallion and run through the passage to the bloodveld spawns. A mask of Crimson, helm of Blood, mask of Broken Fingers, or helm of the Dead Hand can also be used to teleport there. The ones found here are weak to fire spells.

Retrieved from "https://runescape.fandom.com/wiki/Bloodveld?oldid=23349264"
Community content is available under CC-BY-SA unless otherwise noted.