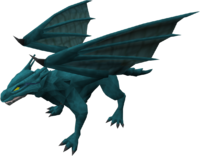 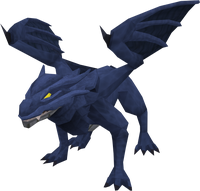 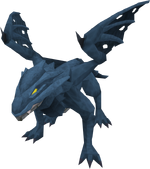 Blue dragons are the second weakest of the chromatic dragons, but are still fairly powerful magic-class monsters. They primarily attack with magic, by shooting a Fire Bolt spell at the player, as well as both close-range and long-distance dragonbreath. Thus, an anti-dragon shield, a Dragonfire shield, an antifire, or Super antifire potion, or the Protect from Magic prayer are essential when fighting them, as they can hit well over 1000 with their breath otherwise (Resonance does work against their breath). They also use melee if the player is standing next to them. They are a very popular monster to kill because the blue dragonhide and dragon bones that they drop may be sold for a combined value of 4,632. Blue dragons do not drop the draconic visage.

Blue dragons are weak to bolts, although other ranged weapons will prove effective. Ranged armour will protect you from their magic attacks, and you can place yourself out the range of their melee attacks. Using royal dragonhide armour is incredibly effective against their magic, so this is highly recommended.

If magic is your preference, you should use the highest levelled wand you can wield, in tandem with an anti-dragon shield. Without a specific magical weakness, use the most damaging spell you can cast. At higher levels of Defence and Magic, the use of an Antifire potion or an Anti-dragon shield becomes unnecessary. This allows for use of the Polypore staff, Staff of light, etc. Take caution when doing this, as at close range the dragons may still use their dragonfire, and will hit at about an average of 1100.

Due to their classification as mages, it is not recommended to engage these monsters in melee combat without at least level 60 equipment. If melee is still preferred, then seek to increase your accuracy with potions and prayers. No matter what an Antifire potion or shield will almost always be necessary. The abyssal whip and Korasi's sword are good choices against these creatures if not using super antifires. If you are an extremely high level in all melee stats including defence, another option is to use a godsword or high-level halberd against them.

Retrieved from "https://runescape.fandom.com/wiki/Blue_dragon?oldid=24924898"
Community content is available under CC-BY-SA unless otherwise noted.