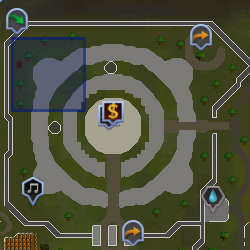 Bob Barter is one of the Market Price Guides located in the north-west corner of the Grand Exchange.

Bob appears to be poor, garbed in unwashed clothing. However, he is actually a wealthy merchant from East Ardougne. By pretending to be poor, he is able to more easily manipulate the businesses and individuals he trades and deals with.

Bob can decant various doses of potions, barbarian potions, olive oil, sacred oil, calquat kegs, and juju potions (except perfect juju potions), into 1-dose, 2-dose, 3-dose or 4-doses where appropriate. The potions can be either noted or unnoted when presenting them to him, but he can only decant between the same type - if you have 1 unnoted potion and 1 noted potion in your inventory, they cannot be decanted.

He cannot decant potions in flasks. Teplin Macagan can provide that service.

Should extra vials or juju vials be required for decanting, Bob will charge 2 coins per extra vial. Through speaking to him, players can toggle whether any empty vials generated by decanting are discarded or handed over.

Bob has an elven counterpart in Prifddinas named Rhobert Dail, who provides the same services.

Bob can also display the current market price of the following herbs: