Bobbleheads are pets that include the Barrows brothers, as well as various Mahjarrats and other characters. 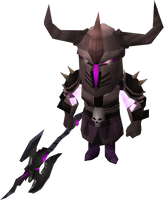 The Barrows bobbleheads can be made using 250 Malevolent energy and the respective Barrows armour set of the brother you want to make a pet of. There are six variants:

Occasionally, the bobblehead may say "You'll never defeat us" or "For Sliske", flipping their weapons in the air before catching it. Other players who interact with the bobblehead will be shown how many Barrows: Rise of the Six kills that the owner has.

If all six Barrows bobbleheads meet each other, they will perform some unique emotes. All six must be from different players; even if one player has all six in the menagerie, their unique emotes will not occur. In addition to this, they must also be granted "permission" from their owners; the brother will ask their owner for permission, and once it is granted, they will wait for the remaining brothers to arrive.

Retrieved from "https://runescape.fandom.com/wiki/Bobblehead?oldid=25382613"
Community content is available under CC-BY-SA unless otherwise noted.