RuneScape Wiki
Register
Don't have an account?
Sign In
Advertisement
in: Items that are always kept on death, Grand Exchange items, Tradeable items,
and 5 more
English

View source
watch 02:56
Raise a Floppa - The Loop
Do you like this video?
Play Sound
OS
For other bonds, see Bond (disambiguation).
Not to be confused with Bonde or bind.

This object cannot be dropped or destroyed.

Help your friends by trading them bonds so they can get membership, Treasure Hunter keys or RuneCoins for free.
Loading...

This object cannot be dropped or destroyed.

You need to pay a small surcharge to make this tradeable again.

A bond is an in-game item that allows a player to pay for selected account-related and out-of-game benefits such as membership, RuneCoins and Treasure hunter keys with in-game resources. Bonds bought with real money start off as tradeable.

Tradeable bonds may be traded to other players and sold on the Grand Exchange. However, when the transaction is complete, the bond will become untradeable. A bond is always bound to a player when it has not been redeemed or traded to another player. It is always kept on death, even when inside the Wilderness. Both tradeable and untradeable versions may be stored in a player's currency pouch, up to a total of 500. Players can only put an offer for one bond per Grand Exchange slot.

When purchased using real life currency, bonds are tradeable. Once traded to another player for an in-game sum of money or items, they become untradeable. Bonds can be made tradeable again for a payment of 10% of their Grand Exchange value (10% currently being 1,893,349 coins).

Right click options for the untradeable bond in inventory are: Redeem, Convert, Deposit, Use, Drop, Examine. Redeem allows you to spend the bond. Convert allows you to make the bond tradeable again (for a fee). Deposit places the bond (or bonds) in your bond pouch.

At any time, whether tradeable or untradeable, bonds can be redeemed for one of the following:

If the player has both tradeable and untradeable bonds, the latter will be used first.

Jagex donated approximately $4.70 per bond put into the Well of Goodwill. A selection of charities have benefited from the donations.

On 4 June 2018, along with membership, the price of a bond increased[2], as well as the number of keys and RuneCoins awarded when redeemed. Prior to this, bonds could be redeemed for 15 keys or 195 RuneCoins, and cost:

A section of the RuneScape community found the introduction of bonds hypocritical and destructive to the integrity of the game, claiming that it was real world trading in the form of gold selling. This is due to the fact that the bonds can be bought with real-life money and sold for in-game gold. 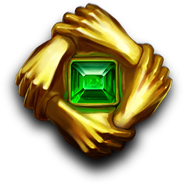 Concept art of a bond

The official stages for using a bond

Email to be eligible to buy Block N Load with bonds.

The popup that appears after logging in for the first time following the release of the bonds.

The popup that appears that advertises bonds.

The interface for bonds

The interface for converting untradeable bonds

Manage bonds for missing loot from the treasure map

The option to redeem a physical TShirt for 6 bonds.

Redeeming a ticket for RuneFest 2015

Selection screen for which membership package to pick

Selection screen for which gold membership package to pick 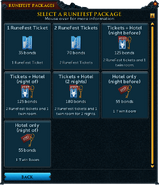 Selection screen for which premier club membership package to pick

Confirmation for redeeming a bond for RuneCoins

Confirmation for redeeming a bond for Spins

Confirmation for redeeming a bond for Key tokens

Confirmation for redeeming a bond for membership

Confirmation for redeeming a bond for a Runefest 2015 ticket

Redeeming for the 2016 Summer of Adventure

Changing your name with bonds.

Redeemed for a display name change.

Redeemed a hotel ticket for RuneFest 2014

Redeemed for the 2016 Summer of Adventure

Redeemed for the 2018 Summer Special Promotion

Redeemed for missing loot from the treasure map