Start a Wiki
RSCOS
This article is about the location in the wilderness. For other boneyards, see Boneyard (disambiguation). 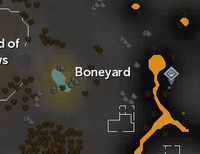 The Boneyard is a location found in level 19-23 Wilderness that has four spawns of Big bones and ten of normal bones. Level 32 Skeletons patrol the area, but for those who can defend themselves against these skeletons, it is an effective place to train Prayer. One method that requires minimal food is to wear equipment that have Prayer bonuses (such as Monk robes and Holy symbol) and any Dungeoneering bone necklace. It is then possible to keep the Protect from Melee prayer on for an indefinite period of time.

Non-members find this area helpful when training Prayer, but most members move on to other methods such as the Ectofuntus and POH Altars.

When the 10 December 2007 updates occurred, the Boneyard was removed, its former location becoming part of the Clan Wars arena. Its music track, Shining, could be unlocked here. On 22 January 2011, Jagex confirmed in a Q&A that the Boneyard would return to the game.[1] On 1 February 2011, the Boneyard returned to the game.

The Boneyard is a common place for PvP activities, mainly because ill-equipped players are often attracted by the four big bones spawns.

Prayer training in the Boneyard

This place is considered one of the best places for non-members to train Prayer (aside from simply buying bulk big bones from the Grand Exchange and burying them at a bank booth), even better than the Chaos temple as it contains four big bone respawns and ten normal bone respawns. However, as it is located in the Wilderness, there is the risk of PKers as well as the level 32 Skeletons that are dangerous to low level players. Bring food and armour if you want to train there indefinitely, but do not bring anything you are not willing to lose.

For the following method to efficiently work, you must have at least level 22 Prayer, but having level 43 is strongly recommended:

Bring three pieces of ranged armour and nothing else. This is to ensure that if a player killer interrupts your training, you will have time to run away before taking massive damage from any attack types. Make sure that run mode and Protect from Melee are on (best chosen via Quick Prayers) and Auto-Retaliate is off at all times. When you are at the Boneyard be sure to only pick up the four big bones. If you are doing this correctly, you should be running in a circle (either clockwise or counter-clockwise) to gather the bones as they respawn.

When you are low on run energy, find a spot where the skeletons cannot attack you (the best spot for this is usually the area largely enclosed by a massive animal skeleton) and rest. When you get 28 Big Bones, run out of the area and bury them. If you have not been using protect from melee, your health points should have been scrapped away by the skeletons. Run south to the Chaos Temple and rest there (making sure that Rapid Heal is on) until you recharge to full health and run energy. Recharge your prayer points at the altar and repeat the process. Alternatively, you can bring a Twisted bird skull necklace, which recharges a prayer point for every bone buried. This enables you to pray indefinitely.

If you encounter a player killer, a good way to escape is to use a ring of kinship to teleport to Daemonheim.

This method of training prayer yields 420 experience per run. The time taken depends largely on how well you time your movement between the big bones' spawns in order to avoid being attacked by the skeletons. Also, turning the camera while picking up the big bones makes it more efficient because, if timed properly, you do not have to physically stop between picking up each pile of big bones until you need to rest.

Retrieved from "https://runescape.fandom.com/wiki/Boneyard?oldid=24927596"
Community content is available under CC-BY-SA unless otherwise noted.