View source
watch 02:56
Raise a Floppa - The Loop
Do you like this video?
Play Sound
This article is about the ork. For the NPC in the ice caves on the Fremennik Isles, see Bork Sigmundson.
Defined properties:

Bork is a big ork initially summoned by Surok Magis in The Hunt for Surok. After the miniquest, he is controlled by a Dagon'hai Elite. Bork can be fought once per day in the Chaos Tunnels. The very first kill earns players 5,000 Slayer experience; afterwards it will only award 1,500 experience, which can be doubled if the player has completed the hard Varrock achievements (Varrock armour 3 does not need to be worn for the doubling boost).

Bork is the only monster with a 100% chance of a charm drop and will drop 5 blue, 7 crimson and 3 green charms upon death. In addition to the doubled Slayer experience, these drops can also be doubled upon completion of the hard Varrock achievements, and improved (not doubled) upon the completion of The Mighty Fall and/or while wearing a ring of wealth. These increases stack with each other. See the drops section for more information.

Defeating Bork at least once is a requirement for starting the While Guthix Sleeps and The Mighty Fall quests, and is an elite Varrock achievement.

Bork first appears in the miniquest The Hunt for Surok, where Surok escapes his imprisonment in Varrock Palace. The player chases him through the Chaos Tunnels, until they reach a large, empty cavern. Surok then summons Bork to deal with the player. Eventually, the player defeats Bork and Surok tries to collapse the chamber in a last attempt to kill them.

Bork later appears in The Mighty Fall as the champion representing the orks in the Kyzaj Tournament. Unlike most of the Bandosians who speaks rather rough and aggressively, Bork is more formal. He also seems to respect the player, as he compliments them on their win against Yelps rather than taunting them.

In the first round, he battles and kills Farkle. In the second round, he goes up against General Graardor, only to be defeated by him. He is spared by Zarador as the orks are near extinction and Zarador is painfully aware that it will happen to the ourgs one day too. After the tournament is over, Bork returns to the Chaos Tunnels.

Bork is located in the Chaos Tunnels. Players can reach his chamber by: 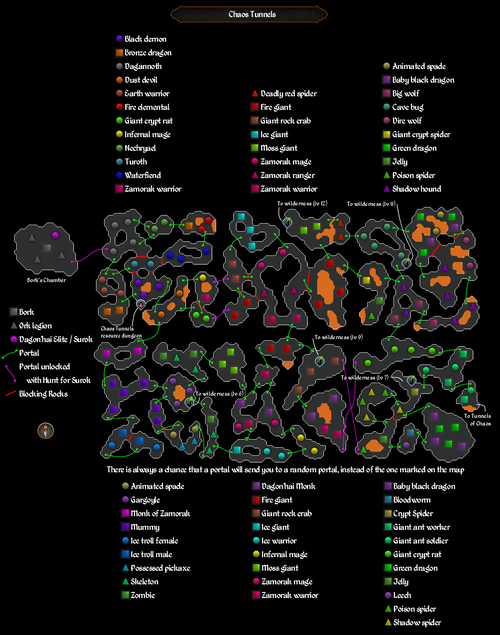 After completing the quest, the player can receive enhanced drops from Bork. The experience is also changed to 4,000 per kill, which is also doubled if the hard Varrock achievements are completed.

Using a collector's insignia or a Luck of the dwarves instead of a ring of wealth will produce the exact same drops.

Each ork legion usually drop a single charm, although not 100% of the time. The most common is a gold charm, but green and crimson charms are also possible. The triple charms from the Familiarisation D&D does not have any effect on Bork or his legions.