Botwatch is the name of the software Jagex uses to detect accounts using bots ingame. This system received a major update in September 2012 along with the release of Botany Bay. According to Mark Gerhard, Botwatch is able to profile accounts and determine whether or not they are using botting software. Most other anti-botting measures have focused on protecting and obfuscating RuneScape's source code, but Botwatch doesn't focus on breaking the code of the botting software. Rather, it monitors an account's actions and determines whether or not it is human behaviour. Certain checks are also in place to determine whether or not the game is being played using an official Jagex client.

The Botwatch system has banned players directly, making it the first automated banning system in RuneScape. This being said, Jagex is quite confident in this system and guarantees that all legitimate players will be safe. However, a major glitch did arise from an early flaw in the system, resulting in thousands of innocent players being wrongfully banned.

On 18 September 2012, Jagex added preliminary bot watching code to RuneScape, and spam bots started to explode and get banned.

They can perform two animations when they get banned. 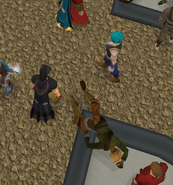 The Dramatic Death emote, this happens when the bot dies

The Rogue Botwatch bans glitch was a major glitch that occurred on 27 September 2012, resulting in the illegitimate banning of thousands of accounts. Around 3:30 PM Jagex time, Botwatch began removing thousands of innocent players from the game and placing unappealable permanent bans on their accounts. It would teleport the players to many locations, including White Knights Castle and Wizard's tower. If an affected player dropped an item, it was instantly destroyed. Affected players were also unable to trade with others, nor use the Grand Exchange. The glitch was fixed in less than an hour after its discovery, and Mod Emilee issued a public apology about the issue and described its cause.

Those who were affected by the glitch later had the falsely issued offences (and accompanying punishments) manually removed, and were also given 20 free spins on the Squeal of Fortune as a goodwill gesture. Some players who were affected had a number of their stats temporarily drained upon logging back in, to levels that would otherwise permanently be rolled back to if they were caught [legitimately] macroing and given a second chance. Their base levels, however, remained unaffected. This could be treated like any other temporary drainage of a skill, such as by drinking a restore potion or simply waiting for the stats to regenerate on their own. However, some effects of the glitch were not so temporary; for example, items that were dropped by affected players and consequently destroyed were not refunded to them.

The next day Mod Emilee confirmed the cause as a heuristic from the testing phase of the system which was accidentally turned on, and stated that barriers were put into place to prevent it from being turned on again.[2] In a Q&A session the following week, Mod MMG stated that the number of affected accounts totalled around 40,000, and confirmed that each and every single affected account was unbanned.[3]

Even after being fixed and reimplemented, however, the system still wasn't perfect, as there were many innocent players who were allegedly being falsely banned[source needed]. Beginning on 15 March 2013, many players logging in from China and South Korea were immediately and permanently banned,[4] many of who claimed to be completely innocent.[4] This became a great concern to players in South Korea and China, opening wide discussion in several Chinese RuneScape forums. The bans seem to have stopped [source needed], but some of the oldest and most experienced Chinese players are still banned.[4] So far, Jagex has not publicly commented on this issue.