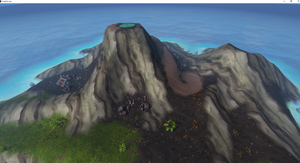 Braindeath Island Volcano, is a volcano found on Braindeath Island in the Southeastern Sea. It is one of the four volcanoes existing in the game, and it is currently dormant. It is marked on the World map with "Nothing interesting happens here".

Braindeath Island seems to have been formed by volcanic activity, and most scholars attribute this to the volcano localized on the northern half of the island. The lack of igneous formations in the area suggests that it has not erupted for many years, but no one knows for how long it has been dormant.

The volcano also plays an important role in the brewing of Braindeath 'Rum'. The crater on the top of the volcano is now filled with stagnant water, marked by the water source icon, which is used in the production of the 'rum'. Since the arrival of zombie protestors on the island, however, the bridge leading to the volcano has been barricaded and is guarded by 50% Luke.

The volcano is used in the Rum Deal quest, and is a possible destination on a Treasure Trail. During and after the quest A Clockwork Syringe, players can access an underwater resource dungeon (the 'Rum'geon) underneath the volcano.

Unlike the other volcanoes, it has yet to receive a graphical update, as the Wilderness volcano, the Wilderness North Volcano and the Karamja volcano received one.

Retrieved from "https://runescape.fandom.com/wiki/Braindeath_Island_volcano?oldid=24922294"
Community content is available under CC-BY-SA unless otherwise noted.