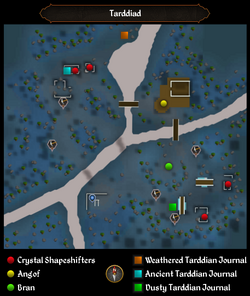 Bran is a crystal raven that may be found on Tarddiad by players who have unlocked the Ravensworn title or with a certain combination of items[source needed]. He appears in a flash of lightning when players step between the pillars to the south-east of the area, south of the bridge south of Angof. He may then be spotted, causing him to say "Mae hyn yn unig y dechrau.", which roughly translates to "This is just the beginning." in Welsh, and then disappear.

Spotting him causes the message A chill runs down your spine and you wonder what this could mean. to appear.

Retrieved from "https://runescape.fandom.com/wiki/Bran?oldid=24922279"
Community content is available under CC-BY-SA unless otherwise noted.