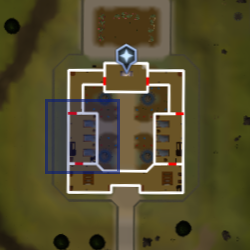 Brother Jered is a monk located on the 1st2nd floor[UK] of the Edgeville Monastery, which means he requires level 31 Prayer to access.

He has a small role in The Missionary's storyline in the Player-owned port minigame, being the one to send Tomlin to Wushanko to build a church, although he instructed him to build a church in The Arc, while Tomlin ignored his orders and built it on Hyu-Ji in The Skull instead. He later comes to inspect the Church with ten White Knights, coincidentally at the same time Purists, Pirates and Soothsayers were attacking the island.

At Tomlin's request, the portmaster at the port Jered was staying at picked up Jered's knights on their ships way to Hyu-Ji. With the aid of the Knights, Tomlin was able to repel the attack, and realised that he was a better warrior than he was a priest, and thus resigned, claiming that Jered helped the decision along.

Retrieved from "https://runescape.fandom.com/wiki/Brother_Jered?oldid=24562112"
Community content is available under CC-BY-SA unless otherwise noted.