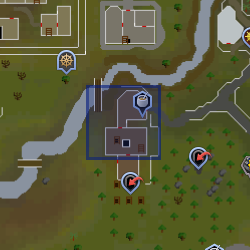 Brother Kojo is the monk in charge of the Clock Tower. He can be found on the ground1st floor[UK] of the Tower found just south of East Ardougne. He is physically weak, being unable to lift any of the 1kg cogs by himself.[1] Despite being in charge of the clock, he doesn't appear to fully understand how it works.[2]

At some point, the cogs required for the clock to function went missing, left strewn throughout the Clock Tower Dungeon. Fearing the townspeople's anger and being too weak to lift the cogs by himself, he asked a passing adventurer to retrieve the cogs. He provided them with rat poison to help retrieve the white cog. Once the clock was fixed, he paid the adventurer 500 coins for their aid.

He also invented a portable watch. However, the townspeople didn't want any because they had the Clock Tower for time telling.[3] Upon the advice of the Observatory professor, the player can request a watch while holding a coordinate clue in their inventory.

Retrieved from "https://runescape.fandom.com/wiki/Brother_Kojo?oldid=24562333"
Community content is available under CC-BY-SA unless otherwise noted.