The Grand Exchange in Varrock.

Knows all about the Grand Exchange. 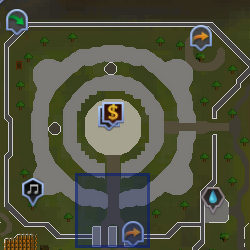 Brugsen worked at his parents' general store when he was younger. There, he learned much about supply and demand. When he got older, he organised a group that made different deals with money. It soon grew very popular, and eventually Brugsen decided to spread his idea all around RuneScape. He then made a deal with the bankers to help him run the Exchange, then built it next to Varrock Palace. Brugsen can be found near the entrance of the Grand Exchange.

He still nowadays stands at the front of the Exchange, although players can now talk to the Grand Exchange Tutor to go through the tutorial. He has a similar appearance to Balthazar Beauregard who runs the Circus Distraction and Diversion, excluding the fact that he is not a Demon.

If a player tries to set up a dwarf multicannon inside the grand exchange he will yell at you, saying "My grand exchange is for peaceful trading. Go play with your cannon somewhere else!"

Retrieved from "https://runescape.fandom.com/wiki/Brugsen_Bursen?oldid=24563190"
Community content is available under CC-BY-SA unless otherwise noted.
... more about "Brugsen Bursen"
RDF feed
Is members only
No +
Store location
The Grand Exchange in Varrock. +