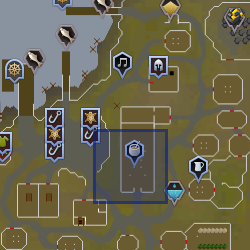 Son of the Fremennik chieftain at the time.

Brundt the Chieftain is the chieftain of Rellekka, the capital of the Fremennik Province. He starts The Fremennik Trials quest, and has small roles in other Fremennik-related quests. He is located in the long hall in the centre of town. If you have completed The Fremennik Trials and have a ring of charos, you may speak to him at any time to change your Fremennik name. Not much is known about his family other than he has a son, Armod Brundtson, and an unnamed wife. Brundt mentions about a wolf called Hati and that it has been terrorising Rellekka as well and asks for your help.

Brundt also appears in the 2010 Christmas event as a party-goer at the Heimland Games. Judging by his actions, he appears to be drunk. As he tells the player, he is enjoying a break from his troubles at home. He talks to the player about his love life, which is not normal for a Fremennik. He wears a red nose and antlers. He calls players by their Fremennik name if they have completed The Fremennik Trials even if you are a F2P. In the 2010 Christmas Event Brundt mentions about a wolf called Hati.

Players doing Treasure Trails clues are sometimes directed to him with the anagram 'Dt Run B' and are given a challenge scroll. The answer is 4. 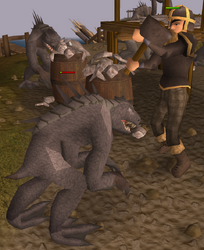 Brundt during the Battle for Rellekka
Click an image to enlarge
Retrieved from "https://runescape.fandom.com/wiki/Brundt_the_Chieftain?oldid=24562343"
Community content is available under CC-BY-SA unless otherwise noted.