Start a Wiki
OS
For information on Burthorpe prior to the 31 January 2012 update, see Burthorpe (historical). 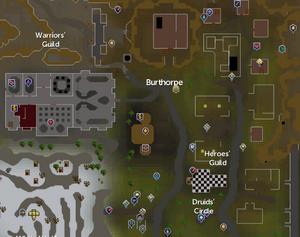 Burthorpe is a military principality north-west of Falador and north of Taverley, and is currently the base of the Burthorpe Imperial Guard as well as the residence of Prince Anlaf. Burthorpe, and in conjunction Taverley, is one of the two locations in Asgarnia that aren't controlled by the White knights, the other being the Black Knights' Fortress in Edgeville. (Druids do have control over Taverley, but there isn't any formal government there that is known to players, so it's usually counted in with Burthorpe) The Imperial Guard control Burthorpe, and they are loyal to the royal line of Asgarnia, especially Crown Prince Anlaf. The Imperial Guard believe that the white knights seized power rather than being given it by King Vallance just before he disappeared. The king has not been seen for a long time, and Anlaf has recently gone into hiding for fear of capture or assassination after the events of the Taverley Massacre.

The Troll Country is immediately north of Burthorpe, and due to that, the city has come under constant attacks, raids and invasions by the Trolls, having led to the Burthorpe - Troll Country War. Death Plateau in particular seems a threat, as many heavily armed trolls have a permanent camp there. The Imperial Guard, with help of adventurers, has been taking measures to reduce this threat. Trolls were often seen invading the town, slaughtering families and soldiers alike; however, recently, the attacks have subsided. If the trolls were to overrun Burthorpe, Falador will use it as a reason to disband the Imperial Guard and take over the town in the name of the White Knights.

Burthorpe also borders the Wilderness, although the two are separated by the Forinthry Cliffs. Nevertheless, the town hosts a beacon in the Beacon Network. Adventurers are occasionally seen testing the beacons, as part of the All Fired Up minigame.

Burthorpe, along with the neighbouring town of Taverley, features several skill tutors for all members' skills, as well as a few free-to-play skills providing low level training opportunities.

Burthorpe can be entered either from Taverley to the south, the White Wolf Mountain from the west or from Death Plateau to the north-west. The games necklace provides a teleport to the Troll Invasion D&D, and the combat bracelet can teleport to just outside the Warriors' Guild. Burthorpe is also an option in the Home Teleport spell, the lodestone being automatically unlocked.

The following quests may be started in Burthorpe:

) is for the most part a low level shop, however it is great for the newer players to get started on a good armour set. Located just south-west of the Burthorpe lodestone, this shop is very easy to find. Challenge Mistress Fara and a bank can be found right next to the shop to the north.

) just east of the Burthorpe lodestone. The shop is similar to Aubury's Rune shop in Varrock, with the exception of a free mind talisman.

) Gaius has a variety of two-handed swords ranging from bronze to adamant. You can find his shop to the north of the Burthorpe agility course.

Retrieved from "https://runescape.fandom.com/wiki/Burthorpe?oldid=23210095"
Community content is available under CC-BY-SA unless otherwise noted.