The Burthorpe Games Room is a minigame located under Burthorpe Castle in Burthorpe. It was reopened to public in 169 of the Fifth Age by Prince Anlaf to attract more public to Burthorpe, despite the troll attacks. You can get there by using a games necklace to teleport to Troll Invasion and running east into the castle and down the stairs.

The games can be played globally on an Instance shard world. This is accessible from any normal world, and allows players on different worlds to join in the same game.

The Burthorpe Games Room was made available to free-to-play players on 5 October 2015. 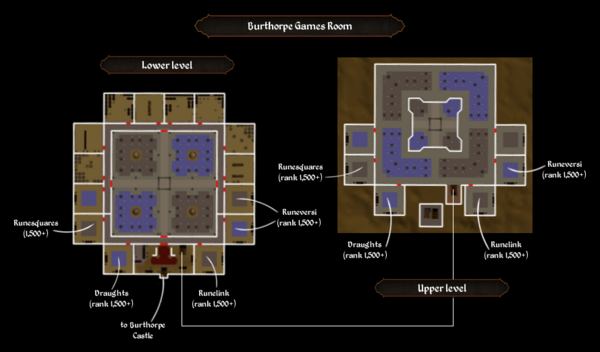 The games room is set out over two floors. Each floor has a central games area as well as chambers dedicated to specific games which require a rank of 1,500 or more in the game to enter.

RuneScape's version of draughts (known in North America as checkers) uses runes as the pieces. Like real draughts, the object of the game is to 'jump' over all of your opponent's pieces. An important note is that it is played with the "forced captures" ruleset on an 8x8 board. If it is possible to capture an enemy piece, the player must take the opportunity.

RuneScape's version of connect four, using runes for the game pieces. Each player must click a column, which will drop their rune to the bottom-most empty space in that column. A player wins when they connect four of their runes diagonally, horizontally, or vertically.

RuneScape's version of Reversi (Othello). Players, in turn, will place one of their runes by left-clicking a vacant square on the board. A rune may only be placed if it captures one or more of your opponent's runes. Once placed, a rune never moves, though it can be flipped so that it changes rune type. To capture one or more of your opponent's runes, you must trap them between two of your runes. Your opponent's runes will then change into your rune type. This can be done across a horizontal row of runes, a vertical column of runes, a diagonal line of runes or a combination of these. The game is over once the board is full. The winner is the player with the most pieces. However, if both players have the same number of runes on the board then the game is a tie.

This game is RuneScape's version of Box It (Lines). The Runesquares board is arranged in a grid pattern. Each player fills in white line segments one "unit" long. If a player closes a box (they create a line which closes any given 1 by 1 square), that player's rune appears in the newly formed square. The player then gets another turn to place another segment. If the player is not able to form a complete square, however, the players turn is over. The game ends when all boxes are filled, and the player with the most filled-in squares is the winner.