The Carnillean House in East Ardougne 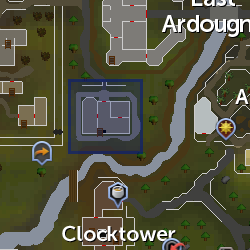 Butler Crichton is the butler of the Carnillean Family, and is involved with the Carnillean Rising quest. He is the replacement for Butler Jones, who was either exposed as an agent for the Cult of Hazeel during Hazeel Cult or, if the player sided with the Cult, resigned from his job because his task was complete (to revive Hazeel). Sir Ceril hired Crichton afterwards.

During Carnillean Rising, he is the adventurer's guide while setting up the quest for Philipe in the sewers, pointing out where what should go, and acts as the "young and handsome narrator" during Philipe's quest. Philipe calls him Butler Cretin.

Chrichton's information on his predecessor
Retrieved from "https://runescape.fandom.com/wiki/Butler_Crichton?oldid=24564745"
Community content is available under CC-BY-SA unless otherwise noted.