Start a Wiki
This article is about the cabbage during April Fools 2009. For other uses, see Cabbage (disambiguation).

• On cabbage field: A curiously vibrant cabbage.
• Jumping around: Cabbage, but not as we know it.
• In inventory: It seems unusually vibrant.

On 2009 April Fools, cabbages began exhibiting odd behaviour; such as bouncing up and down, and moving away and shouting catch phrases when a player attempted to pick them up. People would try to pick them up and they would bounce off saying phrases, and if the players caught them, they would have an equipable cabbage. If you use it with another similar cabbage the following appears: This is not the hidden message you're looking for. You could also make compost out of them. After this event, all cabbages previously equipable reverted back to their old forms.

When eaten these cabbages healed 1 hitpoint, or 10 lifepoints.

When players attempted to pick a cabbage, the cabbage would pop up and say a random phrase before hopping around, such as:

The players could run around trying to catch the cabbage once it had been picked. There were three options when right-clicking the bouncy cabbages when not wielding a cabbage:

The cabbages could also bounce off against any objects such as fences, walls and trees.

When caught, the cabbages could be wielded in the weapons slot. If players had Accept Aid on and wielded the cabbage, they could throw the cabbage to another player who also had Accept Aid on and had both hands free by selecting Chuck player name when clicking the player. If players were wielding a cabbage and had another one in their inventory, the second one would be equipped after they threw the one they're wielding at someone.

Kicking and tapping a cabbage to Oo'glog, in the far south west of the RuneScape map, would summon Brassica Prime, a cabbage god, as a reward.

Level 11 (but not attackable) Brassica Prime. 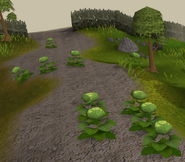 Cabbages with layers.
Click an image to enlarge
Retrieved from "https://runescape.fandom.com/wiki/Cabbage_(April_Fools)?oldid=24542986"
Community content is available under CC-BY-SA unless otherwise noted.