View source
watch 02:56
Raise a Floppa - The Loop
Do you like this video?
Play Sound
OS
"Fallen tree" redirects here. For the dead trees from the Distraction and Diversion, see Evil Tree.

A player paddles in a "Waka" canoe. This animation has since been removed from RuneScape.

A Canoe is a boat that can be made to access faster transportation on the River Lum. This is the only boat that a player can design. They require the Woodcutting skill. At every canoe station there is an NPC to teach you how to make a canoe.

How to make canoes

A player creates a waka canoe.

Take a hatchet to a canoe station at one of the below stations (excluding Wilderness) and then find a canoe tree. Hatchets on the tool belt can also be used. If you do not have a hatchet, the NPC will now lend you one, but the speed of cutting is quite slow. These trees can be found at canoe stations, and appear larger and leafless compared to regular trees. These stations are located in the following places.

Canoes can only go to a certain number of stations away, before sinking. (Note that this only happens when players exit a canoe, and not while they are sitting in it.) When you have travelled to a station, 'A Sinking Canoe' appears and when examined, it will say, "Glug, glug, glug."

Higher level canoes can go farther than lower level canoes. It is recommended that players make the highest level canoe they can make, as this grants more Woodcutting experience.

Previously, an animation was used, but it has since been removed. When going to most locations, grassy shores with bullrushes will be seen. While going to the Wilderness pond, the cut scene will show the canoe paddle into a cave.

Paddles were originally needed to use canoes, but this idea was later scrapped. The player did appear to use a paddle in the canoe animation before it was updated, and "Paddle" still appeared as an item in Quickchat after. Some NPCs near canoe stations are still holding one.

There is a glitch when having an Inferno adze in your inventory and then using the canoe station; the Inferno adze will appear as a Dragon hatchet. 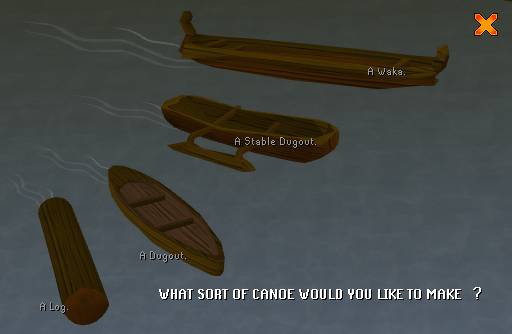