Cap'n Arnav's Chest was a random event. Players could be randomly teleported by Cap'n Arnav to an island, where he had found some treasure. He then asked you to solve his combination lock. You got 5 tries. If you didn't succeed after 5 tries, he hit you over the head with his bottle and teleported you off to some distant land somewhere in RuneScape. Upon correctly completing the random event, players received a random event gift.

Previously, Arnav had buried a treasure in the player's farming patch and would ask the player to open his chest for him. If the player got the combination wrong twice, he teleported them to an unknown location within RuneScape. Prior to 25 February[source needed], it was only possible to receive this random event while farming.

Afterwards, players may have encountered Cap'n Arnav whilst doing anything. In addition, this event had become available to free-to-play players as well. 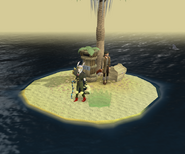 Cap'n Arnav's island in the middle of nowhere.

Solution.
Click an image to enlarge
Retrieved from "https://runescape.fandom.com/wiki/Cap%27n_Arnav%27s_Chest?oldid=22831456"
Community content is available under CC-BY-SA unless otherwise noted.