RSCOS
This article is about the equipable cape. For the cape when mounted in a player-owned house, see Cape of legends (mounted).

The cape worn by members of the Legends' Guild. 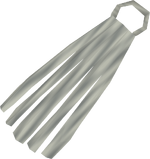 The cape of legends is a cape that can be bought for 450 coins from Siegfried Erkle in the Legends' Guild upon completion of the Legends' Quest.

The cape of legends is a white cape and is sometimes seen as a status symbol as a series of challenging quests must be completed to equip it. There are various NPCs who appear to be wearing a cape of legends or some variation thereof.

It is comparable to obsidian cape, although it is slightly weaker. However, it should be noted that the cape of legends is cheaper than the obsidian cape. As a result, it was a popular choice for a cape when PKing or taking part in dangerous activities. However, with the price of the obsidian cape falling over the years, and the release of new capes since, it has fallen out of popularity with most players.

The cape may be stored on the cape rack or mounted in the quest hall of a player-owned house in the Guild trophy space. This requires three teak planks, and grants 300 Construction experience.

NPCs with the cape of legends