Start a Wiki
OS
Not to be confused with Donie.

I wonder if it was all the 'rum' that pickled him. 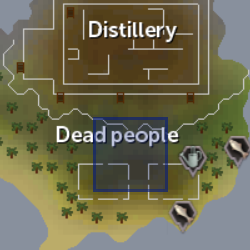 Captain Donnie of The Inebriated is the undead leader of the zombie pirates that have invaded and are picketing the distillery on Braindeath Island. He is involved in the quest Rum Deal, in which you need to make some 'rum' for him and his zombie crew to drink so that he will reveal whom he works for and they will be kept them drunk and sedated. Towards the end, Donnie accidentally says that he is actually working for the notorious pirate Rabid Jack.

During Rum Deal, Donnie and his crew lays siege to Braindeath Isle, specifically the 'rum' factory. After having made fresh 'rum', Captain Braindeath feeds him drunk with the aid of an adventurer and a deal is made: the zombies will stop meddling with the 'rum' production as long as they get some.

Seemingly harmless, Donnie's true intentions are only revealed during A Clockwork Syringe. The 'rum' he collected is shipped to Bloodsplatter Isle and then filled with magical rock fragments and injected into severed zombie parts in order to increase their size and use them to create Barrelchest Mk IIs. In a small dungeon on Braindeath Island, General malpractitioners have also been using the 'rum' to mutate the local crab wildlife by injecting it.

He also plays a minor part in Rocking Out, in which you fool Captain Donnie into believing that you are a new undead pirate in order to obtain plans so that you can obtain Frank's mark.

He plays a minor part in Pieces of Hate, where he rips off 50% Luke's leg after the player, disguised as a Barrelchest Mk II, tells him to do so as per Mi-Gor's orders. He dislikes Mi-Gor, since he sent his crew to invade Mos Le'Harmless and when told by the player that Mi-Gor called for him, cursed and ranted the surgeon that he was soon kicked out of the brewery, though he "felt good" taking it out on him. Shortly afterwards, he is seemingly killed by a swarm of 'Rum'-pumped crabs.

Retrieved from "https://runescape.fandom.com/wiki/Captain_Donnie?oldid=24562839"
Community content is available under CC-BY-SA unless otherwise noted.