Captain of the Imperial Guard 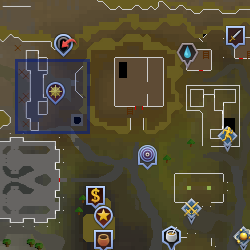 Jute is a captain of the Burthorpe Imperial Guard, succeeding Captain Murry for the post. He is the NPC to whom players speak to start the Troll Invasion Distraction and Diversion. He can be found roaming a little north of the Warriors' Guild between the newly built oil well and Wall separating the Death Plateau and Burthorpe.

He is rather enthusiastic in trying to get players to join the fight against the trolls, and, when asked for a reward, suggests that fighting trolls is reward enough.

He also plays a role in the Burthorpe tutorial for new players.

Retrieved from "https://runescape.fandom.com/wiki/Captain_Jute?oldid=24564471"
Community content is available under CC-BY-SA unless otherwise noted.