The head honcho around here. 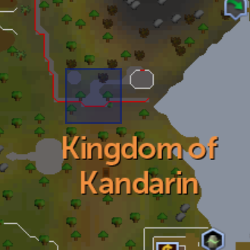 Captain Lawgof is an elderly Dwarven Black Guard captain in charge of the Coal truck mining site west of Seers' Village. However, goblins have been raiding from the south, breaching the perimeter and killing his men. In desperation, he recruits a passing adventurer to help make repairs, check up on a post that isn't reporting in, rescue a kidnapped dwarf, repair the cannon and fetch a mould in order to make cannonballs. Despite his frustration about the goblin attacks, he yells orders at his men instead of helping them.

Lawgof answers to Supreme Commander Bisi, who leads the Black Guard from Keldagrim. His status as captain likely puts him right below the commanders who typically oversee larger settlements in the Dwarven Realm.

Retrieved from "https://runescape.fandom.com/wiki/Captain_Lawgof?oldid=24562720"
Community content is available under CC-BY-SA unless otherwise noted.