West of the western entrance to Kharazi Jungle.

He's the Captain of the 'Lady of the Waves' 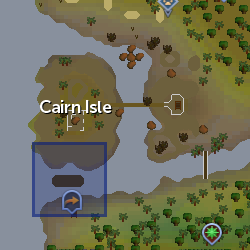 Captain Shanks is an NPC that plays a small role during the One Small Favour quest. He will sell you a one way trip to Port Khazard or Port Sarim.

He is one of a mere two NPCs in the quest not to ask a favour (he does not do favours). The other is Gnormadium Avlafrim, who does not ask because he does not think you are capable of doing it.

Captain Shanks is located on a small ship due west of Shilo Village and just south of Cairn Isle. You must first climb a ladder to enter the boat. His ship, the Lady of the Waves, will take players to either Port Sarim or Port Khazard for a price.

Retrieved from "https://runescape.fandom.com/wiki/Captain_Shanks?oldid=24562702"
Community content is available under CC-BY-SA unless otherwise noted.