View source
watch 02:53
GTA: The Criminal Enterprises - The Loop
Do you like this video?
Play Sound
RSCOS
This article is about the temple near the Goblin Village. For other uses, see Chaos Temple. 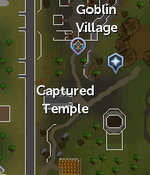 The Captured Temple is a temple of Zamorak located north of Falador, south of Goblin Village. It contains four level 46 and two level 43 Monks of Zamorak, and one Wine of Zamorak on a table as well as an altar.

The altar portrays an image of Saradomin along with two four-point stars but has been vandalised with symbols of Zamorak, which can suggest that the Temple once belonged to Saradominists but was overtaken by Zamorakians.

The temple is seen in a cutscene during The Temple at Senntisten quest, where Zaros tests his power over Gielinor. He causes an earthquake that destroys a statue of Zamorak. The Monks are infuriated, and blame followers of Saradomin for it.

The Bandosian token allows 10 teleports per day to the Bandos camp, just east of the Captured Temple, if the player sided with Bandos during The Bird and the Beast.

Stealing wine does not give thieving experience. The wine is used to make super ranging potions and Super Zamorak brews.

To get the Wine of Zamorak, players can: