She looks very worried about something.
Something looks fishy about her. 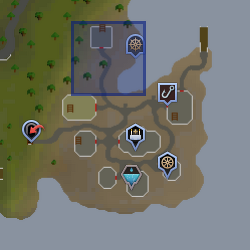 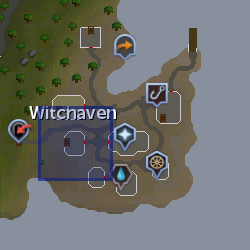 Caroline is a woman who lives in Witchaven with her husband Kent and son Kennith. She can initially be found near the northern shore of the village, worried about the disappearance of her family.

After the Sea Slug quest, she returns to her house and lives on the 1st2nd floor[UK], located south of Mayor Hobb's house. During Kennith's Concerns, Caroline acts very eerie when Kennith's name is mentioned and often praises him by telling the player that he sure is a wonderful boy. It is suspected that this is because she fears Kennith's "unnatural" power which the player finds out about later on in the quest.

If players receive the anagram "Arc O Line" during Treasure Trails, they have to speak with Caroline. The answer to her challenge scroll is 11, but changes to 0 after Salt in the Wound.