Catablepon are monsters that look like green bulls with reptilian tails. They are found in the Pit of Pestilence, the third level of the Stronghold of Security. They use the magic spell Weaken to drain up to 15% of their opponent's maximum Strength level. Players with low Strength are not advised to train on these with melee, as Weaken can drain their Strength quite significantly unless strength or restore potions are used. After the spell has decreased your strength level to 85%, they will stop casting it.

In the north-western most room of the third level of the Stronghold of Security, there is a safe spot for using Magic, Ranged, or a halberd on level 54 catablepon. The spot is to the immediate west of the square patch of tendrils by the skeletons on the western side of the room. Also in the same room, immediately after players walk in the southern door there is a safe spot in the bottom-most square. Level 53 catablepon can be safe-spotted from the north-westernmost corner of this room, by the door. Players will only be hit by the catablepon's Weaken attack, and occasionally a small (45-100) amount of Magic damage. They can also be safe-spotted using the wall "decorations". 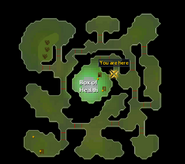 The location of the corner safe spot

Safe-spotting with the wall decorations