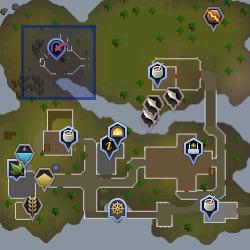 The cave monk is a non-player character outside of Entrana dungeon. His only purpose is to warn players of the horrors below the island.

Despite Entrana's holiness, Zamorak has managed to infiltrate it, and now the caves beneath it are filled with dangerous creatures. Zombies and greater demons can both be found beneath the island, and since players are not allowed to bring armour or weapons onto Entrana, the dungeon can pose a threat even to high-levelled players. The dungeon also contains the last living dramen tree.

The cave monk will warn players of these dangers, as well as two other key points. Once in the cave, there is no way to return to the surface of Entrana. Also, the only ways to leave the dungeon are through the use of teleportation or by using a portal which teleports a player to high-levelled wilderness.

The cave monk and Entrana Dungeon are involved in two quests, Lost City and Recipe for Disaster. In both, players are required to get branches off of the tree.

Retrieved from "https://runescape.fandom.com/wiki/Cave_monk?oldid=24562525"
Community content is available under CC-BY-SA unless otherwise noted.