Cave nightshade is used in Herblore to make weapon poison++ along with poison ivy berries and coconut milk. This requires level 82 Herblore.

Players can eat nightshade, but this is not recommended in most situations, as this causes 100 life points of damage. When eaten the player's character will say, "Ahhhh! What have I done!"

Cave nightshade is untradeable, as it was once used in a popular scam to get players to kill themselves. Players needing food would be given nightshade in the hopes that they would eat it and be at such low health that it would kill them. Beasts of burden Summoning familiars cannot carry nightshade, as this is considered a 'trade'. However, nightshade can be banked by using the Winter Storage special move of a Pack yak and by using an Imp-in-a-box.

Even though Cave nightshade is untradeable, its approximate value can be derived from the price of Weapon poison++ (3), coming in at 22,335.

There are two spawns in the Skavid caves by the ogre city Gu'Tanoth south of Yanille. These spawns can be picked up without wearing gloves or gauntlets. Nightshade respawns after about 10 seconds of picking one up (depending on the population of the world you are in).

Nightshade may also be grown at Draynor Manor using the Farming skill and requires the player to wear gloves or gauntlets to successfully pick it. Bare-handed players won't be able to pick the nightshade and will also suffer a one-time poison damage for 20 life points. Cave nightshade is grown from belladonna seeds. 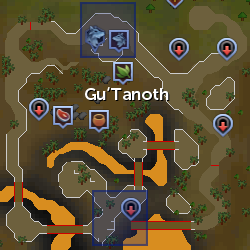 The location of the cave nightshade spawns in the Skavid caves indicated on the map. To enter the caves, players will need Skavid maps and Light sources. Also, a resource Locator from the Mobilising Armies minigame has a random chance of teleporting the player to a nightshade cave without the need for a light source or a map. (However, if after teleporting to a cave the player logs out while in the cave, when logging back in the player will be in the dark and will be attacked by stinging insects, but nothing would actually attack you)

Power gathering cave nightshade involves a pack yak with Winter Storage scrolls or magic boxes that have been turned into Imps-in-boxes. In short, the player goes to a cave with a nightshade spawn, gathers it each time it spawns, and banks it using the scroll or imp-in-a-box. Remember to bring a Skavid map and a light source (a wearable one like a Seer's headband or Mining helmet is recommended, since it saves inventory space). A wearable item that teleports the player near a bank is also useful to save time (and inventory space), such as a Ring of duelling to get to the bank chest at Castle Wars, TokKul-Zo to get to one of the Tzhaar City banks or a Ring of kinship to get to the banker in Daemonheim. TokKul-Zo and the ring of kinship have unlimited charges. The former is quite a bit faster but requires the completion of The Elder Kiln.

With a completely full inventory, the player will need to temporarily drop an imp-in-a-box to open up an inventory slot to pick up the nightshade spawn. Once the nightshade is sent to the bank, the player picks up the dropped box (otherwise it will eventually disappear) and then repeats the process.

The nightshade's respawn time makes even power gathering a time-consuming activity. Some players cope with this as follows:

Retrieved from "https://runescape.fandom.com/wiki/Cave_nightshade?oldid=24534756"
Community content is available under CC-BY-SA unless otherwise noted.