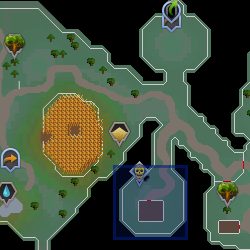 Chaeldar (pronounced Kay-ull-dar) is the fifth most-advanced slayer master in RuneScape. She is found in the throne room of Zanaris, directly south of the entrance from the Lumbridge Swamp. She gives out mid to high level Slayer tasks which may only be attempted by players with a combat level of at least 75.

Chaeldar is a fairy; like others of her race, she hails from Zanaris. Chaeldar excelled in combat and Slayer, and eventually rose to the position of Slayer Master. Chaeldar is Guthixian by belief, as are most fairies of Zanaris.

The following takes place during The World Wakes.

During the Attempt to assassinate Guthix at the end of the Fifth Age, Chaeldar assisted the Guardians of Guthix and other Guthixians in attempting to prevent Guthix's slumber from being disturbed by god factions aiming to kill him to break the edicts. She assists by preventing General Graardor and his troop of goblins from breaching the chambers, and then assists in the defence of Juna against Saradominist forces. Ultimately, however, the Guthixians fail and Guthix is killed by the Mahjarrat Sliske, who'd used an adventurer to gain access to the site. Chaeldar would then return to Zanaris.

Players who have not completed the Smoking Kills quest will receive half the normal amount of points.

Players can receive Slayer points for completing Slayer tasks, based on how many tasks players have accomplished in a row. Completion of a task assigned by Chaeldar will grant you:

This means that if using Chaeldar over the long term, an average of 16 Slayer points will be granted per task.

The Fairy ring network is a useful method of doing Chaeldar's Slayer tasks. It has teleport spots close to the Slayer Tower (CKS), the Fremennik Slayer Dungeon, (AJR), and other locations to be reached easily for no cost to the player - all of which contain the slayer monsters that she assigns. However, you need to have reached a certain point in or completed the quest Fairytale II - Cure a Queen.

Chaeldar's special task is for the player to test an experimental fungicide spray against ten Zygomites and survive to return to her and tell her the results of the test. The player uses the spray in place of the normal Fungicide spray, when the zygomite the player is attacking has been reduced to 20 life points or less. When applied, the experimental spray will have one of the following effects, chosen randomly:

Note that the challenge is only complete when the player returns to Chaeldar and speaks to her; simply killing 10 zygomites with the experimental spray does not finish the task. The spray cannot be used to kill more than the required 10 zygomites.

For Chaeldar, assuming all possible assignments are available, $ S $ = 388.

Retrieved from "https://runescape.fandom.com/wiki/Chaeldar?oldid=24562182"
Community content is available under CC-BY-SA unless otherwise noted.