You will not be refunded if you destroy this item.

Deploy this to start a skilling or combat competition.
Loading...

Challenge gems are items that can be bought on Solomon's General Store in packs of 1, 3 and 6 for 10, 25 and 45 RuneCoins respectively. They could also be bought in the Fun Item Shop and found whilst training or killing Clawdia at the Summer Beach Party.

No more than one challenge gem may be placed within 10 squares of another gem or a bank. Challenge gems may not be placed in some areas, such as the Fight Kiln. A player can start a challenge gem at any time by choosing the deploy option. A 4-pin entry code may also be specified to restrict the players who are allowed to enter the challenge.

Up to 50 players can enter a challenge gem competition. While the competition is ongoing, players rank 1st, 2nd, and 3rd have their rank visible above their head. The score is calculated by experience obtained multiplied by 10. This does not take account bonus experience.

After the competition ends, if the same player wishes to start a new challenge, they must wait for the previous challenge gem to despawn.

For the skilling competition, you're allowed to choose the amount of time for the competition (between 5 and 30 minutes in intervals of 5), the skill (must be a skill as there is no option for overall XP), and the entrance fee (between 0 coins (just for fun) and 1,000,000 coins)) and the delay time (between 1 and 5 minutes) until the competition automatically starts.

Players who enter the competition earn points based on the base XP they gain (so bonus XP does not give any advantage).

For the combat competition, one may select the amount of time for the competition (between 5 and 30 minutes in intervals of 5), the enemy combat level range (0 to 10,000), the player combat level (3 to 138), the entrance fee (between 0 coins (just for fun) and 1,000,000 coins) and the delay time (between 1 and 5 minutes) until the competition automatically starts. Additionally, the combat may also be limited to PVP only and/or wilderness areas only.

Upon release, the challenge gem received considerable amount of complaints due to the fact that "The MVP" and "The Real MVP" were a golden colour - like those won by finishing first in the seasonal hiscores. Due to this, on 15 June 2015 the colours of the titles were changed to mustard yellow. In a hidden update on 14 July 2015, their original colour was restored. The golden colour was reverted back to a pale green colour during the 20 July 2015 update.

A deployed challenge gem for a skilling competition

A deployed challenge gem for a combat competition

Select which type of competition

Select what skill to compete on and stake 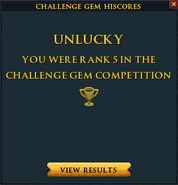 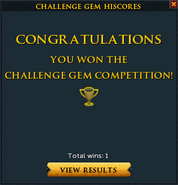 Retrieved from "https://runescape.fandom.com/wiki/Challenge_gem?oldid=24555138"
Community content is available under CC-BY-SA unless otherwise noted.